With 8 Top Chef contestants remaining, it was time for the popular Restaurant Wars challenge. Sunset Lounge led by Leah up against Radhika’s Sahana. 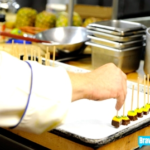 Both restaurants struggled, but in the end, the Europeans, Stefan and Fabio, saved the Sunset Lounge. Fabio worked the front of the restaurant as only he could while Stefan continued his dominance, creating two desserts that delivered his team to salvation. I thought Stefan’s culinary weakness would have been desserts, but I surely was wrong. Even though Stefan is portrayed as an arrogant, non-team player, that dude can cook and is the one to beat in Season 5.

As expected, losing team leader, Radhika, was sent home after her nerve-racking experience in Restaurant Wars. Did I mention Stefan was arrogant? Read his words about Radhika’s departure. True, but a little too blunt.