From incandescent to fluorescent to LED has been my path for recessed lighting. After getting recessed lights, I picked up a box of BR30 incandescents and was happy. I like the warm colors of the incandescent bulbs, but they do produce heat and don’t last very long. Can’t beat these for dimming purposes either.

As the initial incandescents started burning out, I tried CFL bulbs. These are physically bigger to accommodate the swirly CFL inside so they jut out a bit of the recessed can. Fluorescent light is whiter and cooler, but takes some time before the brightness is at its max, and there’s only a slight dim to these dimmable CFLs. Life span is better than incandescents, but I’ve had a few go out already after a year. 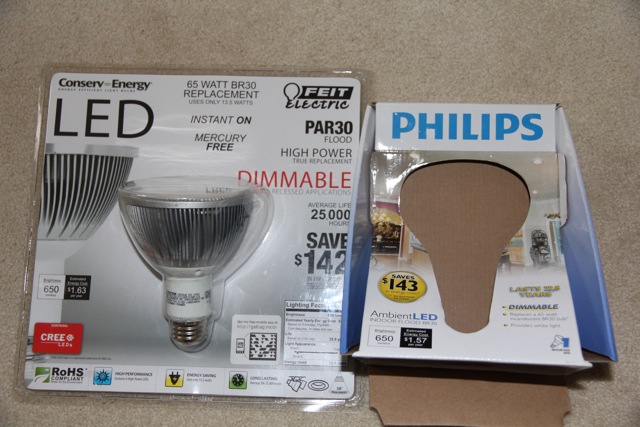 Now up are LED bulbs. These are downright expensive, costing about $30-40 per bulb! But they supposedly last 20+ years. They’re getting more mainstream with bulbs available at Costco and Home Depot. Before fully committing to these, I wanted to try them out and bought a 65-watt Conserv Energy PAR30 LED from Costco and a Philips Ambient LED from Home Depot to compare.

At first glance, the Conserv Energy looks more industrial, almost like a rocket booster ready to launch a Space Shuttle into outer space. The six LED elements are clearly visible surrounded by a metal ring that looks like a computer processor’s heat sink. 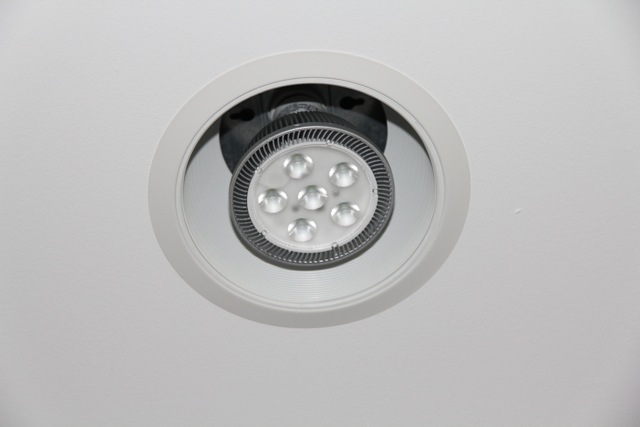 The Philips Ambient LED also shares an industrial appeal with its metallic frame but thankfully, it’s not so utilitarian and features some style. The light covering is frosted so the LEDs are not so visibly pronounced, and this changes the light dispersement as we’ll soon see. 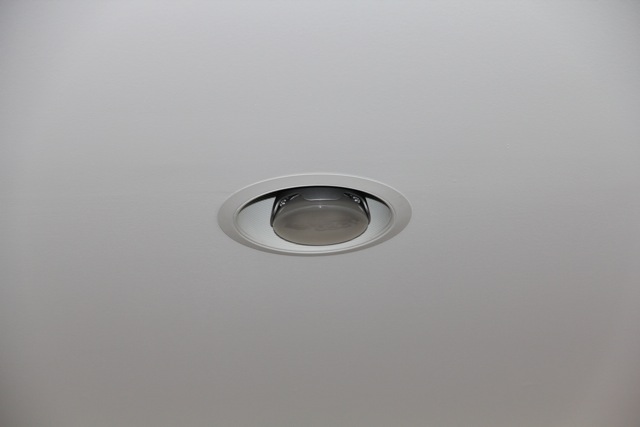 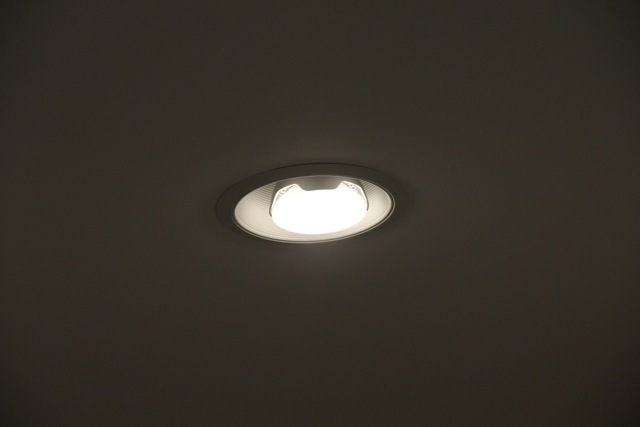 Here are the two lights installed “side by side.” The Philips is the furthest from the smoke detector and the Conserv Energy is next to the detector. Notice the light dispersement of the different bulbs. 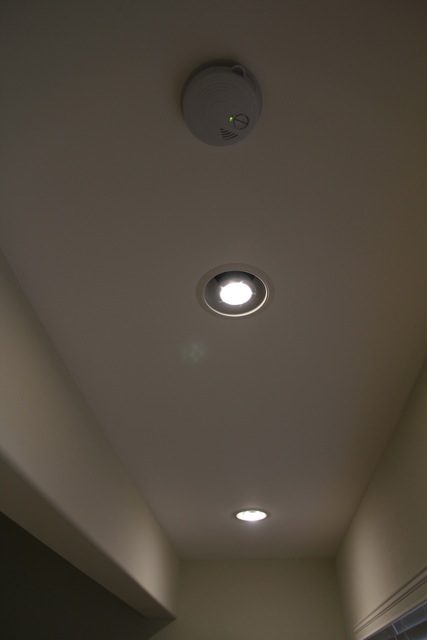 LEDs side by side

The Philips Ambient LED lives up to its name, dispersing the light over a wider range to provide ambience. The light diffuses near the bulb so it is significantly brighter in the upper regions of a room and fades near the floor. The Conserv Energy has the opposite behavior. Its light is not diffused and is more directed downward so low items are better illuminated. However, this lighting also creates harsh, sharp shadows. Each bulb shines brightly and is painful to look at directly, and unfortunately, these recessed cans don’t have a dimmer so I can’t comment about the dimmability of each.

I’m not sure which bulb I like better. In general, the cast from the Philips Ambient LED is more pleasing to me but the floor area seems a little dark (from a typical 8-ft ceiling). But then again, is illuminating the floor that useful or needed? Maybe it’s time to return both bulbs and keep searching for another LED light bulb.

Jam a Jingle with Jake
More Pics Rejected by Wokintime