Have you noticed that Google is making the world a smaller place? Of course, there’s Google the search engine which brings the knowledge of the world to your fingertips. There’s the Google Earth app that lets you virtually travel the world at the touch of your finger. On a more local level, who doesn’t rely on Google Maps to find your way? I don’t know about you, but knowing directions and being able to see locations and their surroundings makes me a more comfortable traveler. With Google Maps with Street View, the global scale minimizes to real views of locations. The world is definitely a smaller place due to Google’s innovations. 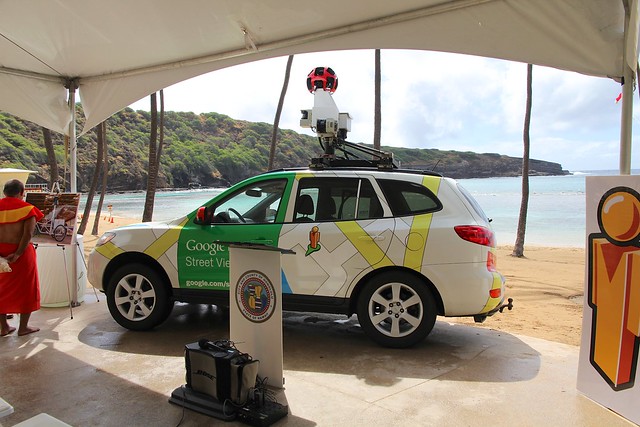 Today, Google, along with the City and County of Honolulu, held an event announcing Google’s commitment of making the world more accessible with a focus on Hawaii. With Google Maps cars and Street View trikes, much of Oahu, the Big Island, Kauai, Lanai, Maui, and Molokai have been mapped so viewers can go on virtual tours of the Islands. The event highlighted the addition of many of Hawaii’s top attractions to Street View. Now (or soon enough), you’ll be able to go from your part of the world to Hawaii and check out attractions such as the Hawaii Volcanoes National Park, the Honolulu Zoo, Kualoa Ranch, Sea Life Park, and Waikiki Aquarium. Beyond these popular sites, you can tour resorts, universities, and many, many of our state parks. How’s that for making the world a smaller place?

Mayor Peter Carlisle talked about his vision for a high tech Hawaii and how working with Google is a great partnership. The Mayor was followed by Evan Rapoport, Product Manager for Google Maps Street View who expressed his sentimental joys of returning to Hawaii for this latest Street View initiative. 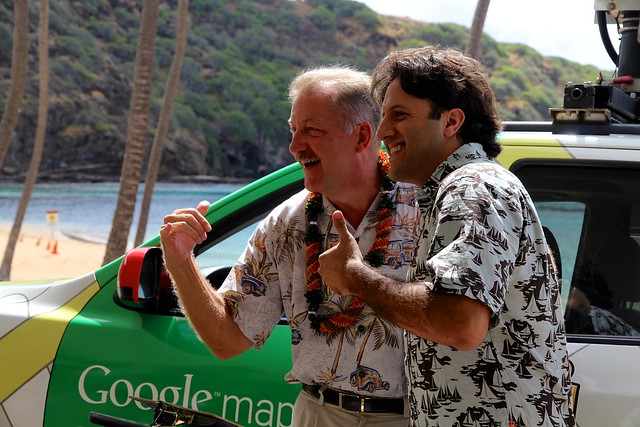 In Hawaii, residents definitely know what it’s like to live in a “small world,” and it goes something like this… I haven’t been to Hanauma Bay in decades, decades! Not since the 1990’s while in high school. Evan Rapoport is a former Hawaii resident and still owns a home on the Windward side. Before leaving Hawaii to join Google, Evan befriended Phil who happens to be my high school classmate. I hadn’t seen Phil in decades, and guess who’s there at the event? Yep, Phil! So I have Google to thank for this unexpected reunion in this world that’s definitely getting smaller.

Here are more pictures of the Google Street View event at Hanauma Bay. 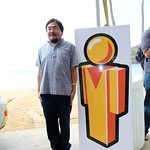 Be sure to check out other coverage of today’s event.

Update (6/21): Here’s a short video of Evan talking about the expanded features of Google Street View.