No, I didn’t pre-order an Apple Watch, wanting to see it in person first. So I scheduled a fifteen minute appointment to try on Apple’s newest wearable at the Ala Moana Apple Store, but those fifteen minutes are woefully short. Other than making an appointment, there’s no way of actually putting an Apple Watch on your wrist. The demo units are either behind a case or mounted in a display. 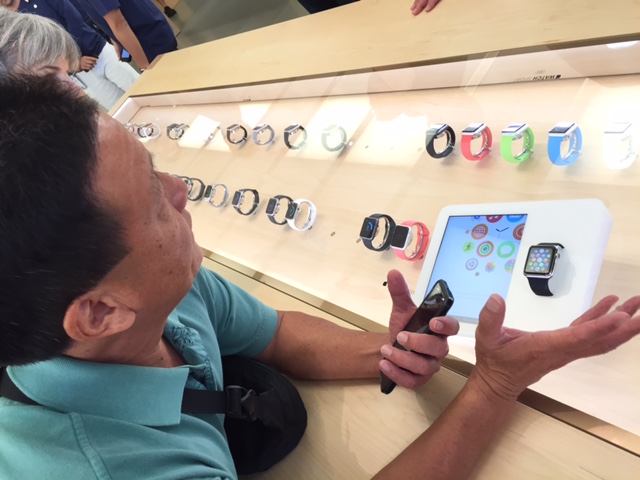 The appointment runs through an educational demo of the Apple Watch. It’s kinda cool, but kinda lame since you’re standing there bed to your Apple concierge essentially watching a tutorial about the Apple Watch. The fun begins when you try on the different sizes and bands.

Guys definitely need the 42mm model. The 38mm looks too small and the band itself will barely fit. I could not slip my wrist through the 38mm Milanese Loop band.

A quick physical comparison to my Kickstarted Pebble watch, the 42mm Apple Watch is actually smaller. However, the craftsmanship and feel cannot be compared with the Apple Watch.

About the Sport Band

I’m not totally digging the Sport’s fluoroelastomer band. Yeah, it feels good, but I had a hard time putting it on single-handedly. It doesn’t align easily since you have to insert the pin first then tuck the excess band on the inside of the band. When taking off the Sport band, it comes off too readily, making for accidental drops.

The watch bands are easy to interchange, but personally, I don’t think all the bands match with the aluminum finish of the Sport model in case you’re thinking of “upgrading” your Apple Watch. 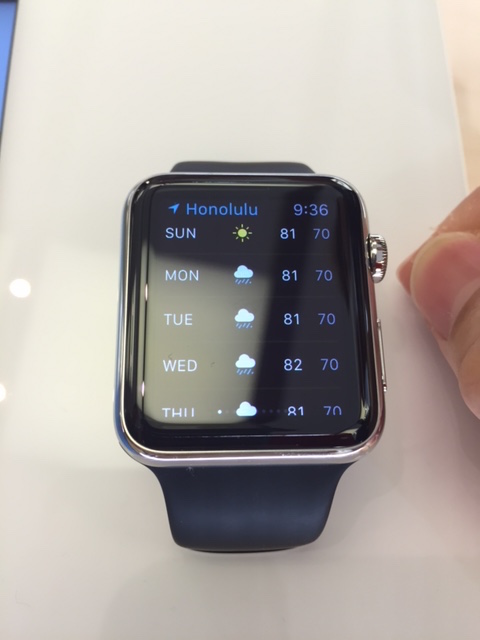 The display of the Apple Watch is clear and crisp if not tiny. Looking at watch faces and well-designed activity monitors is fine. But trying to use Maps is too difficult for aged eyes. I guess the point is to use audio or haptic feedback to guide your directions.

The general consensus is to buy the most inexpensive Apple Watch Sport model to minimize your investment in a first generation device. That’s very sound advice. Heed that advice and don’t try on the stainless steel Apple Watch. Otherwise, you very well may disregard that logical advice. I’m not sure what it was, but when I tried on the steel Apple Watch, it simply resonated with me. It felt heavier, making me more conscious about wearing it, but it wasn’t a burden. The leather strap definitely projected sophistication, and the magnetic closures felt more sure than the pin-and-tuck Sport band. Maybe I was imagining things, but I thought the steel itself felt cooler. Touching the sapphire crystal face, it felt smoother than the Ion-X glass of the Sport. And the stainless steel finish simply has an elegance missing from the anodized aluminum Sport. Trying on the Apple steel will only make your buying decision harder.

Initially, I was leaning to the Sport model in silver with a white band. But space gray with the black band is now my preferred Sport model. Seeing the gray/black combo stands out next to its colorful family members. But yes, the steel outshines all the Sports. 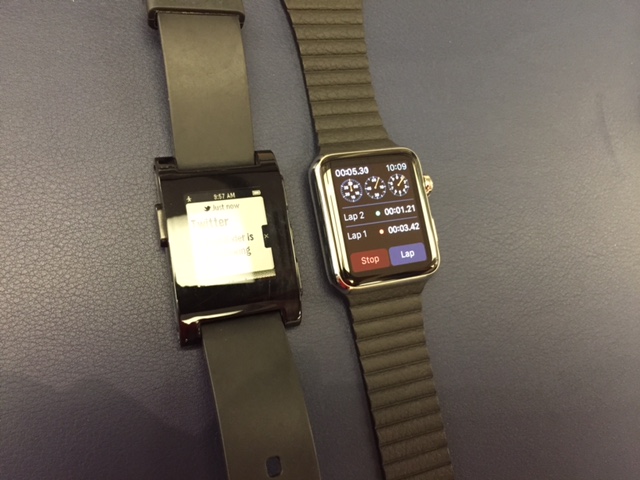 And there went my allotted 15 minutes. In fact, my appointment went overtime, nearly at 25 minutes, and it still wasn’t enough to adequately comprehend and assess the Apple Watch. I still haven’t figured out which watch to get.

While at the Apple Store at Ala Moana, I ran across Ryan Ozawa and Burt Lum there for their try-on appointments. Here is Ryan’s Apple Watch post, and watch Burt’s video entering the store.

Through the Apple gauntlet for the #applewatch