It’s been four days since HammerTime started broadcasting on 96.3FM KRTR in the mornings. You’ve tuned in by now, right? Truthfully, after four days, I’ve listened to about four hours of the trio of Davey D, Gregg and Shawnee Hammer. While I’m elated Hammer’s back on air, I ain’t that infatuated with the man. 😉

I know this is just the very beginning with rough spots expected, but from my limited sampling, here is Pulpconnection’s analysis and breakdown.

But before that, if you missed the launch of HammerTime, listen in to the first two minutes of HammerTime. So what if they started about 5 minutes early?

Just nitpicking here, but the name HammerTime is appropriate but small kine confusing. Thanks to MC Hammer, HammerTime is part of our vernacular. Gregg Hammer is a marquee draw and since two of the three members of HammerTime are Hammers, the name fits. But there’s Davey D who seems like the team’s radio lead but gets unequal billing. No, I’m not trying to disrupt the team, just pointing out an observation.

KRATER 96 plays adult contemporary music, and at my age, I don’t mind this music since it’s all familiar. Rihanna is as hip hop as it gets around here. There’s a good mix of 90’s and newer music. Trivia fact: if you listen to the launch of HammerTime, the first official song played is Natalie Imbruglia’s Torn from 1997.

Fortunately, KRTR has the best traffic reporter assigned to their station with Danielle Tucker and Traffic on the Fives. Danielle’s reports are thorough and tweaked just enough so they don’t sound like she’s repetitively reading the same report for several stations. 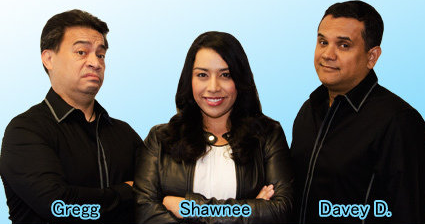 Let’s start with the jockette, Shawnee Hammer. Since her departure from the I-94 Wake-Up Crew way back in the day, I’m not sure what she’s been up to. But she hasn’t missed a beat. Her news delivery is a bright spot for the fledgling HammerTime. She has a quick, precise delivery with enough inflections to stress words and convey vibrancy.

Davey D is a name I’ve heard before, but I’m not familiar with his style. I’m guessing his role is the experienced point man/facilitator of the program. The problem I have is telling the difference between the voices of Davey D and Gregg. When Hammer is in caricature-mode, it’s easy to discern, but in straight up regular dialog, I can’t immediately tell. Their voices have similar qualities unlike the former pairing of Gregg and Rory Wild.

Now, the main show, Gregg Hammer. Yes, I am a fan and believe Gregg belongs on the airwaves as one of the most talented entertainers. His range is wide and his speed of improvisation is unparalleled. But… these are new times, a new station, and a new team.

At times, it feels like Gregg is a one-man show. He goes into character but has to play all the parts. Listen in.

While he can pull this off, the effect is more compelling when the team complements or augments the stories and jokes. Yes, the team is still adjusting to one another and will get better over time; I understand that. I’m not sure if Gregg’s team knows how to react to his skits or can’t keep up or can’t lead him to the next segment. Again, Rory Wild was the master of this. With a few, well-placed comments, questions, or even a sigh, Rory would be directing the discourse giving Gregg a new path for hilarity. The team just needs more time, more repetitions, more exchanges before everything comes together. My basis for comparison is Gregg’s time with the Wake-Up Crew that spanned years. Seemingly he’s known Rory even longer. So it’s with this bias and expectations, I listen to HammerTime.

Ugh, okay, this has got to be the worst aspect of the show. It’s no fault to any HammerTime member, just the format of KRTR. But I really hate it. It’s the whole “right after this…” teasing. What celebrity was arrested last night? Find out right after this. Where “this” is typically one or two songs and a commercial. Then there’s some banter followed by another song, news, or traffic report. Then another teaser. Now follow this format for hours. There’s just no flow. Staccato is a rhythm but not a desired flow for this morning show.

Unshackle the Hammer. When things start getting good, the format kicks in, stifling the creativity of Gregg Hammer. Remember the days of the Wake-Up Crew when they would talk for minutes, not playing any music, just doing the obligatory bill paying commercials. The dialog would carry and engage the listeners. I would stay through the commercials so I wouldn’t miss out when the conversation picked up. The current show format doesn’t allow for this, letting me leave knowing I won’t hear from Davey, Shawnee, or Gregg for some time. And when I do hear from them, it’ll be for a scant few minutes before another mandatory music interruption.

It’s the beginning, and I’ll keep listening to HammerTime. You just never know when Gregg will talk about his Instagram selfie.