Update 1/5/2018: Battery changed out after making a return “appointment.” Servicing took about 90 minutes. Store is full of customers wanting to check out their iPhone battery condition. iPhone 6 feels noticeably faster with the battery replacement.

Update 1/4/2018: Battery has arrived in store and need to schedule an appointment when to bring the phone in. I also got an email stating stop by anything (within 7 days), but it’s better to call back and actually set a time for the repair (1 to 2 hours).

After hearing that Apple updated its iPhone battery replacement program to begin immediately rather than late January, I made an appointment for Sunday, December 31, 2017. Unfortunately, the Kahala Apple Store Genius Bar had already exhausted its supply of in-house batteries on Saturday.

The Genius did run through a hardware diagnostic as a formality but didn’t find anything wrong with the iPhone 6 or its battery. He did say that we could change the battery for $30 regardless of the battery condition. We now have to wait about three to five days for a battery shipment then return to the Apple Store when notified.

From that point, it’s a one-hour service to swap out the battery. Not bad for $30. 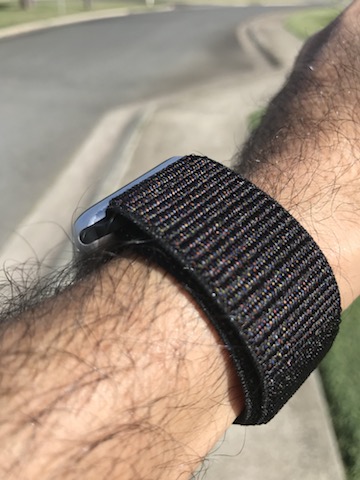 And while you’re at the Apple Store, don’t look at different bands for the Apple Watch. Otherwise you might give in and get something like this deceiptively multi-colored “black” Sport Loop. Although described as black, the band has iridescent qualities showing off red, blue, green, and even more colors. It’s super nice and actually very comfortable!

Found My Next Court Shoe
Where Were You?