Make no mistake who still runs this town. Hova, aka Jay-Z, is the undisputed king of ROC Nation and still calls the shots. One can only wonder if all that has transpired is part of Jay-Z’s blueprint?

Kanye West’s disrespectful interruption of Taylor Swift. Uncalled for and uncool, yes, but controversial and attention grabbing? Yes. Observe the spike on Twitter after Kanye went off. Hey Kanye, who brought you into the game? Oh yeah, your “big brother” Jay-Z. 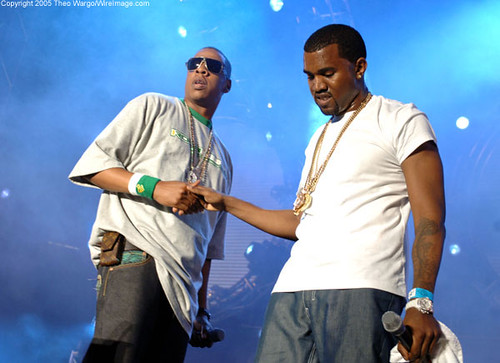 Who did Kanye say should have won for Best Female Video of the Year? Beyonce, who later did win for Video of the Year. For her acceptance speech, Beyonce let Taylor Swift finish her words after being interrupted. What a classy move, Mrs. Jay-Z.

Rihanna’s most recent stint in the spotlight is something she would rather forget… and quickly. All the attention is just a reminder of her victimization by Chris Brown. Don’t want this attention and want to get back to the music? Find something else for the media to target. Big Brother, please have Kanye step forward at the MTV’s VMAs.

Hey look who performed on the premiere of Jay Leno’s new late night show. It’s Kanye, Rihanna, and Jay-Z to promote the release of Jay-Z’s latest, The Blueprint 3. Good timing. Run this town!

But the Jay Leno show provided Kanye the venue to publicly apologize to Taylor Swift (and gave more airtime to Mr. West).

And on Tuesday morning, Taylor Swift was a guest on The View to talk about her VMA experience (and get more fans). After the show, Kanye personally called Taylor to apologize for his heinous act which she supposedly accepted.

My oh my, what a blueprint Hova has architected, and we are all witnesses! Take us out Rihanna…

What?! Kid Cudi could be involved as well? Maybe not, but he is from Kanye’s stable and released his Man on the Moon today.