Recently, I’ve been buying a fair share of digital music from Amazon’s MP3 Music Store. Prices are good with some unbeatable, limited time deals. But besides the MP3 versus AAC formats, there are some other differences between the two music stores.

Check out this comparison of Green Day’s 21st Century Breakdown.Â  Amazon had the digital download for $5, but it’s now $11.99 with 9 customer reviews.

iTunes is also selling this new release for $14.99 but with 3918 customer reviews! 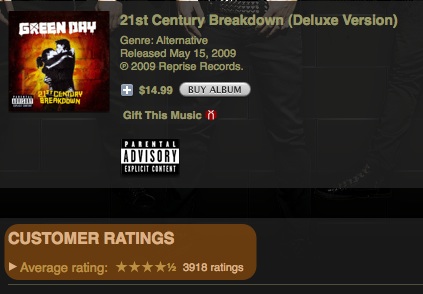 This is a change for Amazon which usually has the majority of customer reviews. In this case, it looks like the music community is more active on iTunes (but I bought the songs from Amazon). ;)Â  Wonder which store has a better deal on Eminem’s Relapse.