Talk about getting Hammer’d for real kine. There I was watching the Honolulu City Light Parade when I heard that voice. Was that Aunty Mildred? Wayne Anzaki? Joe Souki? Yes, yes, and yes as Gregg Hammer, Davey D, and a KRTR 96.3 parade entourage rolled down King Street then promptly stalled.

I don’t know why, but the entire parade stopped in place for at least 5 minutes. During this dead air time, Gregg and Davey entertained the crowd telling jokes, poking fun at their sister station’s blown out sound system, and encouraging parade watchers to do the wave. As Mr. Hammer talked to the crowd, he noticed me filming and taking pics.

Meeting Gregg Hammer from Gee Why on Vimeo.

Talk about honored! Even in the dim lights of the parade, Gregg was able to spot and recognize me standing over on the sidewalk. He acknowledged me as “the blogger” and came over to shake my hand. Awestruck! We chatted a bit and took this pic (otherwise it never happened, right?). 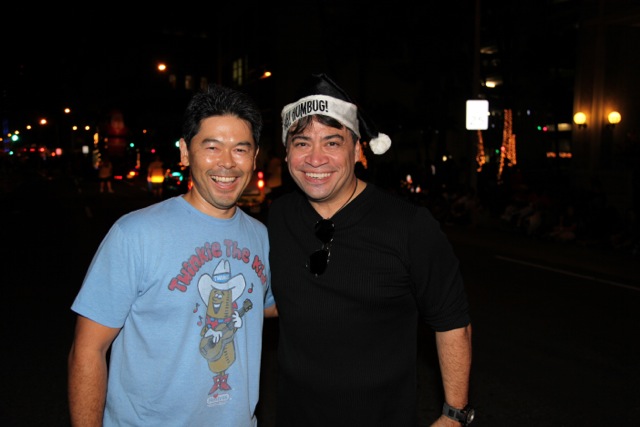 Thanks Gregg! What an amazingly memorable way to meet in real life. No bah humbug here. 🙂