Our last day in New York and our last CityPass stop was the Statue of Liberty and Ellis Island. There’s not much to say other than this.

Okay, I do have something else to say. Do these canine cutouts actually work?

Unfortuantely, we couldn’t get tickets for pedestal access or climbing Lady Liberty, but the audio tour of the island is pretty good. Bring earbuds to make listening easier.

Then it was off to Ellis Island which is larger than I expected. Hard to imagine all the immigrants processing through this hall.

Then having to face the decision marked by “The Stairs of Separation.”

Back in Manhattan, we along with the Ghostbusters visited the massive public library.

I like how Ecto 1 has a swimming pool ladder, a beer keg, a rolled up garden hose, and a bullhorn.

The library’s store has some interesting items for purchase. 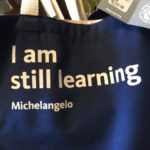 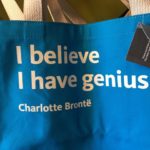 Oh by the way, the Derrick Rose Knicks numbered shirt finally had large sizes back in stock at the NBA Store, a few blocks from the library.

Visited Grand Central Station one more time (and another quick bite) then walked back to Times Square.

At Champs Sports, I finally saw the Adidas CrazyBoost Light 2016, but they only carried the red or white colorways, no black.

But really, I did not see one pair of the (new) CrazyBoost Light on feet while in NYC. What I did see were a ton of Nike Roshes, lots of Air Jordan Retros, and surprisingly, a whole bunch of Foamposites. Foamposites! A blast from the past that is still made but hasn’t seen any innovations in recent times. Now, I’m hunting for discounted Foamposites at Ross.

Got thirsty so stopped in Starbucks to try out their new Iced Coconut Milk Mocha Macchiato. Frighteningly, the barrista didn’t know what the drink was or how to make it. Admittedly, the drink had debuted that week, but for as many people there are in New York, I would have figured another patron ordered the CMMM. The drink tasted fine, but I wasn’t sure if truly was a CMMM.

Took the subway north to get bagels then had to check out Central Park before we left. Oh hey, Levain Bakery is close by…

It was past seven as we waited for the bus to come.

Back at home base, we packed up for one last NYDC16 sunset.