First off, thanks goes to Adidas and Kanye West for releasing the ever-popular Yeezy line of shoes in mass quantities to the public. Usually a Yeezy drop is plain bananas, but the release of the Triple White colorway seems more equitable due to the mass quantities. 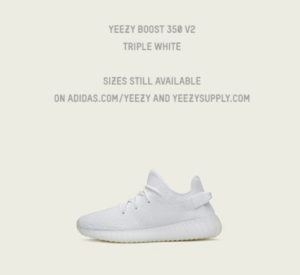 But one downside of the wide availablility is the notification of this availability. Between Adidas and YeezySupply, I don’t know how many emails I’ve received telling me that the Triple Whites are available, still available, and have been restocked. I mean this is actually a good problem to have for consumers, but compared to previous Yeezy drops that are done in hours, this Triple White release spanning days is just odd.

One Week Until UNIQLO in Full
Amazon Echo Wall Clock, I Want One