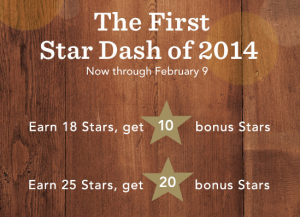 This is definitely going to promote the irritating behavior of making individual purchases. You know the type of customer, ordering four drinks for the office but paying for them one by one to get four stars. Good for your star generation but sucks for those in line behind you as four separate transactions are rung up, especially when all you want is a cup of brewed coffee. Now if the store is empty, and there’s no line then knock yourself out. But in the early morning crush, don’t be pulling this obtuse impertinence.

If you earn seven less stars (18 stars), your Dash bonus will be halved to 10. I wonder if this Star Dash is continued indoctrination for those who bought the free coffee or espresso tumblers for January. Now that they’re addicted to the caffeine from multiple visits to Starbucks on a daily basis, this promotion might continue the behavior.

Naturally, I signed up for the dash, but I doubt I’ll make it.

Looking for a Drill
Back to the Structures