When it comes down to the wire, Warrior guard Roderick Bobbitt’s game shoe of choice is the Under Armour Curry 2 “Suit & Tie.” Black and white with red highlights, this shoe has been on Bobbitt’s feet during crunch time.

Rod’s worn many Curry colorways this season and recently has gone from the low cut Curry 1 to the high cut Curry 2. Rod’s even changed shoes at halftime during a few games when he struggled on-court. In the Big West Conference tournament, Rod wore the new Curry 2 low cut but inevitably went back to the Suit & Tie with successful results.

Early in the season, #5 favored the Curry 1 low. Rod rocked a white, home colorway and black for the road unis. 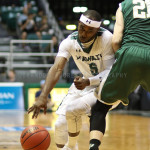 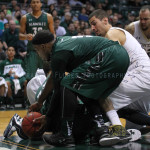 I thought he and then-Warrior Isaac Fleming had something with the South Beach-themed “Curry Camp” colorway. The bright teal and orange made for great contrast on court.

But during the Big West season, Bobbitt went from low to high and from the Curry 1 to the Curry 2. Unfortunately, the “upgrade” to the Curry 2 didn’t come without a hitch, especially with this Northern Lights colorway. Yes, dramatic, but also unlucky for the Rainbow Warriors. Rod had his worst times with the Northern Lights. Remember that loss at home against Long Beach State? Yup, Northern Lights.

In the post season Big West Tournament against Santa Barbara, Rod changed it up showing off the Curry 2 Low.

But that was the first half in which Rod struggled. Guess what was on his feet in the second half? Yes, the Suit & Tie for a 88-75 win.

See the Curry 2 Suit & Tie in the background?

As the Warriors face Cal on Friday, I’m hoping to see Rod bust out something new like the Curry Two Surprise Party or the Combat Green Curry 2 Low.

But… I’d be perfectly okay with the Suit & Tie and a victory.