I knew it. I just knew it. My faith in Nordstrom’s online ordering system has once again been betrayed, and I’m extremely disappointed with this continued trend. For a company renowned for customer service, their online ordering failures is a stark comparison.

A little history. My first Nordstrom cancellation was for a shadow-like colorway of the Air Jordan 1 Mid. A successful online purchase, a confirmation email followed by a cancellation email a few days later. But then, Nordstrom did have a redeeming moment offering a similar AJ1 model in blue, but even then, I was expecting another cancellation.

That brings us to this week with Nike’s release of its latest colorways of the React Element 87. Again, Nordstrom does surprise me with its shoe offerings, and I was lucky enough to order the Element 87 from Nordstrom online. I did have my reservations since the online system was acting strangely. Although showing all three colorways (Solar Red, Neptune Green, and Total Orange), clicking on any always brought me to the product page for the Total Orange. Assuming the red and green colorways were both sold out, I proceeded to order the Total Orange. A few sizes were displayed including a 10.5 Men’s (I wanted to size up on these since I heard the upper material does not stretch).

The order went through easily without a glitch. On 10/11/2018, I received a confirmation email listing the multiple items I ordered, including a single pair of Element 87. Later that same day, I received another email stating that some of my items had already shipped. But the Element 87 had not shipped but was listed as “In Process.” Hmmm, I was concerned but still hopeful.

On 10/12/2018, I checked status once again and once again, lost more hope. The Element 87 status changed to reflect a ship date of November 2, 2018. That would be two weeks after placing the order, and I knew that wasn’t a good sign.

Then on 10/13/2018, the false promise of Nordstrom was realized with the inevitable cancellation email that starts like this:

We’re sorry that we couldn’t fulfill your order

And sure enough status of the Reacts now looked like this: 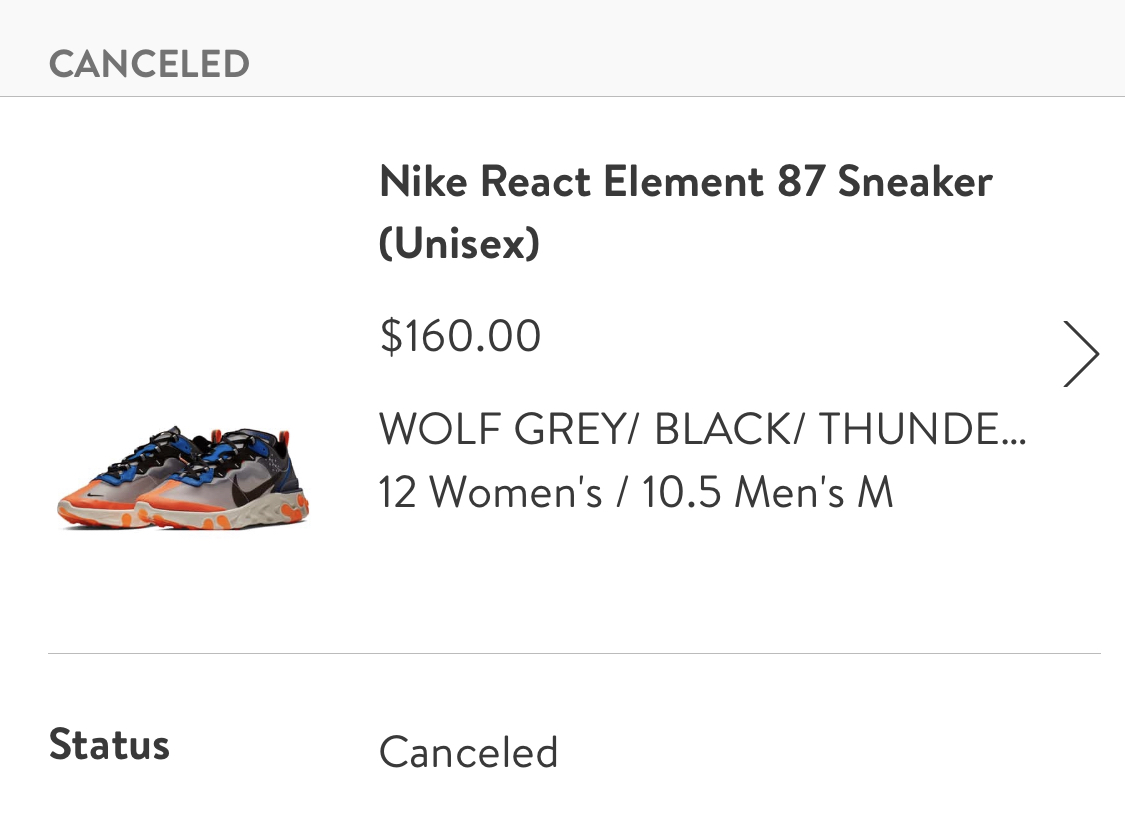 I called customer service who answered the phone promptly on a Saturday night in Hawaii. But after providing my order number, the rep confirmed that the order is cancelled due to product unavailability. I asked why it took so long to figure out availability, and she explained how the order of processing the purchases was a factor. Already at this point, I knew getting the shoes was impossible. I don’t know the precedence of how Nordstrom processes orders, but I do know it’s flawed. And the company seemingly knows it as well, admitting that they are working to make improvements.

Again, the premise is that the Nordstrom inventory and their online ordering system aren’t completely in sync, needing approximatley three days to fully understand a product’s availability.

So here I am mistrustful of Nordstrom’s online ordering system of false promises and their ability to actually fulfill their orders. I expected more from Nordstrom.