Like the Kansas City Chiefs in Super Bowl LV, I was totally helpless against my Tampa Bay Buccaneers aka my Orbi wifi gear. After getting a newer Orbi mesh system (RBR750) for better performance and coverage for the household, I wanted to continue using existing gear like my Orbi Voice (RBS40V). Unfortunately, the two systems […] 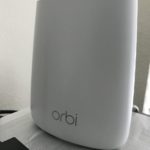 Walking the lanes of Costco, I noticed a new pack of Netgear’s Orbi wireless networking devices. Instead of the three-unit pack I had seen previously, Costco carries a two pack (one base and one satellite), and the cost is good, right under $200. While a single Wifi router has been working in my household, speeds […]