Other than being stuck in traffic as the First Family’s motorcade makes its way to an Air Force One departure, when are the other times you Barack and chill? It’s got to be all those times Hawaii residents experience power outages, inexplicably when POTUS is in the islands. This started back in December 2008 when Mr. Obama’s visit coincided with a 12-hour, island-wide outage, and yes, we used candles from Pay ‘n Save.

In 2010, the power outage precipitated POTUS’ arrival as Ala Moana went dark leading up to Christmas. This untimely exit of electricity brought on the first sentiments of Barack and Chill with this sign offering irate shoppers apologetic “Mahalo’z.” 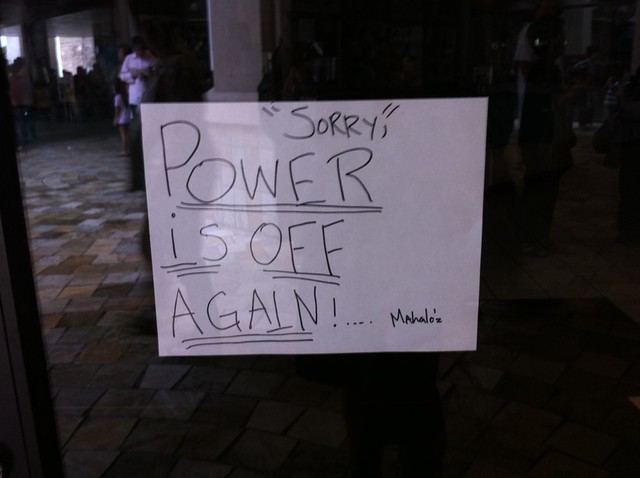 According to my blog posts, I did not record a power outage for the next five years although I don’t believe it. In any case, the next Barack and chill moment came in 2015 as stormy weather blacked out Hawaii.

Then almost one year later as we left 2015 and entered 2016, there was Hawaii’s (or at least Kailua’s) Barack and chill moment. With gusty winds clearing the skies, total darkness unveiled our starry skies.

(the stars are the white flecks)

During this most recent outage, as I pondered the Pulpconnection conspiracy theories about the timing of these outages, I sat back, realized, and defined “Barack and chill.” Perhaps, these nighttime outages could have led to Netflix and chill opportunities, especially if you queue up Barack Obama’s “Night” summer playlist on Spotify. But for me, this Barack and chill moment meant doing dishes by flashlight.

Barack and chill everyone!